Since the end of last year we have had bushfires in Australia, they are really bad and from what I know the worse on record as there are fires in nearly every state

The state I live in is currently bad at the moment along with I believe some towns closer to the city.
My parents live in the country (30 mins from me), some of the smaller towns which I think are about 1 hour from my parents have been hit. The closest town which is currently on watch is about 40 mins from my parents place. They said they should be ok but the smoke is really bad where they are and they are ready in case they are given the warning to leave. They have a caravan which dad has ready and take their dogs and parakettes and come in to me.

We just had a hot week with yesterday being the warmest day so far but we had a cool change today dropping from the 40s to the mid 20s (Celsius). There was chance of rain but we haven’t had any yet.

This is a map of the fires, I’m in the area where it says Albury / Wodonga.

Better map of my state because for some reason they’re not coming up on the other map.

Victoria's combined source of emergency information and warnings, helping the community to prepare for, respond to and recover from emergencies across the state.

I will add my thoughts and prayers to you, your family and everyone who is going through this awful time. Hopefully you will get some rain and relief very soon.

Thanks Sue
The town I live in is safe, my parents are also safe at the moment but closer to the towns under threat at the moment so they have it worse than me with the smoke

Hoping we do get some rain tomorrow, we have cool weather for the next couple of days at less then it will start to warm up again Tuesday

I saw there have been fire fighters from USA, New Zealand and I believe Canada also sent over to help out.
N

Praying for rain and relief for y'all.

I'll send over some of our rain, we have a surplus. I've seen it on tv and it looks awful, an area like that would near enough cover the UK :O I hope they can start getting it under control soon

I've seen Australia on fire on the news every day and it does look bad. So sorry you're having to suffer thru this. My nephew, who is a forest firefighter from Arizona, is one of the Americans who was sent over to help with the fires. Thinking about you every day.

The guy on the right holding the flag is my nephew.

Thankyou everyone
I know they were in the state where Pingu lives last month, I checked with him the other day and he is ok.

The prime minister announced on the weekend that 3000 troops would be deployed to help with evacuations and transporting supplies to remote regions.

We will be thinking of you and your parents and like Loopy Lou said we will sent a lot of the extra rain we have your way hopefully.
P

I wanted to let you and others in your area know that if they need any help of any kind that ham radio operators are over in the area to work
through communications and any emergencies. Tell your family and friends to check out any ham radio operators info.on line or on the radio
so all of you can get the detail of what's going on. Wishing You and Everyone in your area only the Best and May God Bless All of You!

I wanted to let you and others in your area know that if they need any help of any kind that ham radio operators are over in the area to work
through communications and any emergencies. Tell your family and friends to check out any ham radio operators info.on line or on the radio
so all of you can get the detail of what's going on. Wishing You and Everyone in your area only the Best and May God Bless All of You!

Here is this morning's headlines: 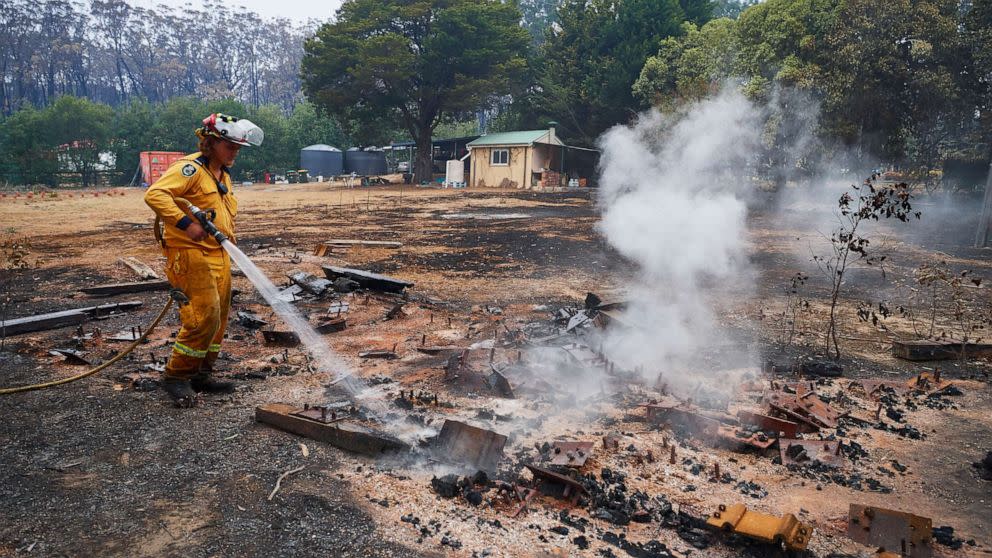 Two dozen Australians in the state of New South Wales have been arrested since early November for intentionally setting fires as record-large blazes continue to burn across the country. There have been 24 people charged with deliberately setting fires among 183 facing legal action in the...

I can't believe how cruel some people can be. I hope and pray that everyone will be able to get up and back
on their feet in no time. I ask myself what are these people trying to prove? My prayers are with everyone
and I wish all of you only the Best. May God Bless You!

My prayers are with you. Hopefully everyone that has been affected will be able to get back on their feet soon.
Those who deliberately set forest fires should be punished to the full extent of the law, & given the maximum penalty.

I can't remember but I think I read somewhere that the fines for the people who started the bushfires are going to be serious.
I don't know about the other states but I think the alot of the fires in my state (VIC) were from lightning strikes or other fires and not deliberately lit.

From the firefighter perspective, we are just getting absolutely hammered. Its brilliant that other countries have now sent people over to assist. My brigade has been flat out since August and on multiple occasions, we've sent over 30 firefighters out across my state
You must log in or register to reply here.
Share:
Facebook Twitter Reddit Pinterest Tumblr WhatsApp Email Link
Top