It's funny I was telling my co-worker about this thread.
I was also telling him how my sister was telling mum that my eldest brother was complaining that his teenage boys just play video games all the time.

My co-workers in his early 50s, I'm in my early 40s so we often talk about how it's changed.

I remember one Christmas we got a commodore 64 which we all shared, my brothers played it more then me and my sister but I used to sometimes play it. We used to take turns. I think I had an Atari at one stage.

Mainly we played outside with the other kids.

As for computers. When I started high school in 1990 we did touch typing for 1st 2 years. Then we did computer classes in year 9. We used to get to play 'where in the world is Carmen Sandiago?' which was fun and educational.

. Main reason I even got it was emergencies and i was looking for work so a contact number other then my home number

I remember having a typewriter too I think to be honest we were just poor, my parents were only teenagers themselves and with their third kid on the way when they moved from Ireland, so everything we had was got piece by piece. We were told to go out and play after breakfast and to come back at dinner time haha.

I taught myself to type and do a proper document layout when i was at school, we only had 3 libraries in the computer and there was a typing program that measured your speed and accuracy, so since then i've been able to touch-type, and don't even need to look at the keys, i can be watching tv or something and replying to someone at the same time.

I went back to college then university in 2014, and have quite the library of textbooks, but then i also used the internet to search for all the scientific journals i needed (THANK you Sci-Hub!). All submissions had to be electronic to go through TurnItIn to check for plagiarism, which to be honest is a good thing because at least it's more easily edited when you just need to adjust some lines of type rather than rewrite entire pages, like i had to the first time i was at college (2002-2004). Most of it was done by hand even then.

I don't think technology is inherently a bad thing, but i agree that kids who have grown up with it would probably really struggle if it suddenly disappeared. People of my generation grew up in a time where all this tech was only just emerging, so we had to use trial and error to learn life skills, not just youtubing stuff.

Also, look at all the space we save :O Instead of having a dvd/blu ray player, a cd player, a computer, a games console, shelves of books (well ok i still have 3 rather overflowing ones, but trust me that's an improvement), my PS4 does pretty much everything, and my Alexa and Kindle take care of the rest.

As for applying for jobs on paper? I'm so glad we don't have to do that anymore. Wow the hand cramps! Now my cvs and previous applications are saved and just need a couple of minutes to amend before sending.

Loopy Lou said:
As for applying for jobs on paper? I'm so glad we don't have to do that anymore. Wow the hand cramps! Now my cvs and previous applications are saved and just need a couple of minutes to amend before sending.
Click to expand...

I don’t like writing on paper whether it be writing a letter or application letter as I used to make too many mistakes . Given the choice I’d always prefer to use computer then I can check my work and make sure the spelling and grammar is ok.
I joke with my co worker how I am so different to the younger girl who I job share with as I may take longer to do my work but I always triple check my work to make sure it is 100% correct where the other girl doesn’t seem to put the same effort in. I just put it down to experience and age (I’m 16 years older).

Pac Man was the only video game I ever really played. I was pretty good, too. After some family friends' kids ruined our game system, we didn't get another. One reason I think I didn't like the newer games was the they were played with--no joystick.

"Highights in the History of Epilepsy: The Last 200 Years" 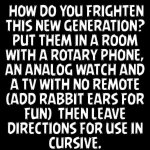 You just gave me a good idea to do in my study hall this coming week. Let's see how many students pass this test.
Here's wishing you only the best and May God Bless You!

You just gave me a good idea to do in my study hall this coming week. Let's see how many students pass this test.
Here's wishing you only the best and May God Bless You!

I dont know if you ever seen it thereis a Youtube clip of these 2 teenagers who were given a rotary phone and told to dial a number. They had idea how to use it.

I love this and I'm going to put this on the big screen at school on Monday to see how many students can figure this out. It should be
very interesting. Thanks again you made my day. I wish you only the best and May God Bless You!

That's so funny CQ! My brother and I used to fight over who would get to make the phone calls when we had a rotary phone!!!!

My Grandma and mom told me how pones they worked with using party lines. Depending on how many times the phone rang meant who the phone call was for on the line. My mom's family was 3 rings but anyone else on that line could pick up the phone and hear the conversation. She said the neighbor did that!

I used to have a pager. We had some type of number language on it to talk to each other. What would kids would call that today? Old school texting?

Don't know how many of you computer nerds remember BASIC. I loved it and could write programs like crazy. I got so mad when Windows came out and BASIC wasn't used anymore. Not really mad about it now though, Windows is a tad bit easier to use.

My grandparents used to darn everything. Could you imagine sewing up the holes in your socks instead of just tossing them out and buying new ones?

There were 'Chicken Pox Parties'. If one kid got chicken pox then parents would get all the kids together so they'd all get it and they wouldn't have to worry about it after that.

I think about how dependent a lot of people are on technology. I remember when we were kids if a baby/ toddler was upset you’d give them a toy or rattle to keep them happy.

Now when I’m down the street or at the bus stop and I see parents with their toddlers (usually 2 and older) and the toddler starts grumbling the parent gives them their phone or iPad/ tablet to play games on.

valeriedl said:
My grandparents used to darn everything. Could you imagine sewing up the holes in your socks instead of just tossing them out and buying new ones?
Click to expand...

My mum was the eldest of 6, I’m pretty sure her mum made a lot of their clothes but I do remember her telling me how she had an Aunty with older kids and once or twice a year they’d get a box of hand me down clothes from her aunties kids for mum and her siblings. Mum said it was like Christmas.

I am the youngest of 6 so I think mum used to also make a lot of our clothes, mainly mine and my sisters. My sister is 8 years older but mum kept her clothes aside for me for when I got older. My sister is only short when she was younger where I am a little taller and by the time I was 10 I was taller then her and fitting in her clothes.

My mum still loves going to opshops (charity shops), quite often she gets things which are almost knew for low price.
S

My mother used to sew a lot when I was little, especially my party dresses. Because of that, I've picked up sewing & embroidery as 2 of my hobbies. I don't sew clothes, though--I like to quilt. I also like to make things to decorate the house.

I still hand wash some of my clothes (when i don't have enough money for the launderette) and can sew well enough to make small items or stitch up clothes. I remember when the washing machine broke at work in a care home and the staff didn't know what to do about getting the essentials done. It was a good work out for my arms that day to handwash sheets and such :O

I think everyone should learn these sort of skills out of necessity. Or basic life skills like what to do if there's a power outage/your water goes off/zombie apocalypse.

Technology is a wonderful thing but it's good to know the basics for when it's necessary.

My grandma had 11 kids. They didn't have much money then so everyone got the hand me downs from brothers and sisters and nieces and nephews. Aunts and uncles would stay at the house at times, hand me downs from them too. There weren't many beds so they'd seep 3 kids in a bed at time.

I don't know how they managed to do it but when my grandmother and grandfather married my grandfather worked in a steel mill. After that he worked in my great grandfather's small tractor business of selling and repairing them. My grandparents took it over when he retired. They were very well of in the end, nothing even close to what their life was when they were kids.

My mom loved sewing when they taught her. She altered clothes she bought to fit her. She said that at times she'd think of something to make and have it made to wear to school the next day. Heck it would take more time than that for me to figure out what I was going to wear the next day!
P

Thanks for sharing your family past, I find it beautiful and it reminds me a lot of my Great Grandparents and how they had 9 kids and the girls did a lot of sewing. My Great Grandma made 73 quilts and gave them to the family when they got married.
It seemed that there was more togetherness back in the good old days at least that's my opinion. I miss the old days when the family and friends would stop by and visit on the weekends and people had time for each other.
My Grandma used to go out to the barn and gather eggs early in the morning and then walk over 2 miles to school. I wonder what it would be like if people had to do that today. Thanks again for sharing your story I love it. Wishing you only the best and May God Bless You!

Thanks. You made coffee come out my nose. LOL

When our son, he just turned 30, was little I taught him how to use a rotary phone. When he was on heave from the Army several years ago he taught us how to use our smart phone. Things sure have changed! 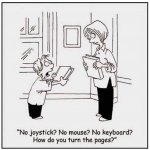