VEEG and being considered for surgery

Loopy Lou said:
For those who have had VEEG's before, did they allow you blankets during the night? My body temperature drops a lot during the night, and being cold is pretty much the only thing that will stop me sleeping. I'm so worried about being cold and shivering, perhaps affecting the eeg!
Click to expand...

I know every hospital would be different especially with every country. But with the hospital I go to for my epilepsy I wasn't aloud any sheets or blankets etc during veeg or anything to cover me as they wanted to catch all seizure activity and felt anything over you could hide any seizure activity. Each monitoring room had their own heating / cooling which we could get set at own temp.
I had my 2nd veeg in July which was middle of Aussie winter so I had winter pjs on and wore winter dressing gown at night so wasn’t too bad.

I took my laptop and phone with me for my 2nd veeg but couldn't use them plugged in as it affected the machinery. So I would use them off the chargers then when they needed charging I would put them on the charger which was close enough to where I could get to from my chair. I also took some puzzle books.

Just getting packed now, lots of nice warm pjs including a fuzzy onesie lol. I think i'm going to try and stay up as late as possible tonight (i have to be up at half 6) in the hopes that they'll get something on the first day. Tiredness, stress and hyperventilating seem to be my main triggers. I don't know if i'll have wifi on my laptop there, or if i'll be able to get the site on my phone, but i'll let yous know afterwards how it goes, i'm sure i'll be chatting to CQ at some point anyway
N

I hope it goes well and that you feel good afterwards. Good luck!

I told Lou I will update you guys as it takes too long on her phone.
There was a delay before she got put into a room but she's all wired up now & she has to sleep deprive tonight.

I have my fingers crossed it wont take too long before her brain performs.

Am back now. Have a headful of glue, skin rash/blisters from the adhesives on my shoulders and face, and holes in me from cannulars (spelling?) gone wrong.

Unfortunately, from what the neuro has seen so far, my brain did not perform as expected, and they don't have enough information. I didn't really press the button much except by accident, the nurses did a couple of times, but i think they may have mistook my normal sleeping as abnormal activity?

On the first night i was sleep deprived, and then meds taken away, then they did the flashing lights and hyperventilating the next day (i thought for sure the hyperventilating would do it).

I feel really disappointed that a half hour eeg 10 years ago showed more than a 5 day one. So the neuro is saying now that it doesn't look like surgery will be an option. I hadn't even decided whether or not i would go for something like that, but it would have been nice to have the option.

For now i'm being referred to a neuropsychologist again, they said they noticed that i didn't recognise or couldn't tell which nurse was which, or name any of them even after seeing the same people for days, or that i'd forgotten if i'd taken my medication.

So yeah, i don't really know what to think. I won't get the full results for a few months until i next see the specialist in Liverpool again, but at the moment it feels like it was a huge waste of time and i'm rather disheartened.

Hopefully this pic works and won't be enormous, one bright spot was that someone was really jealous of my minnie mouse dressing gown lol. The cables are in that white thing going down my front, i tripped over it lots! 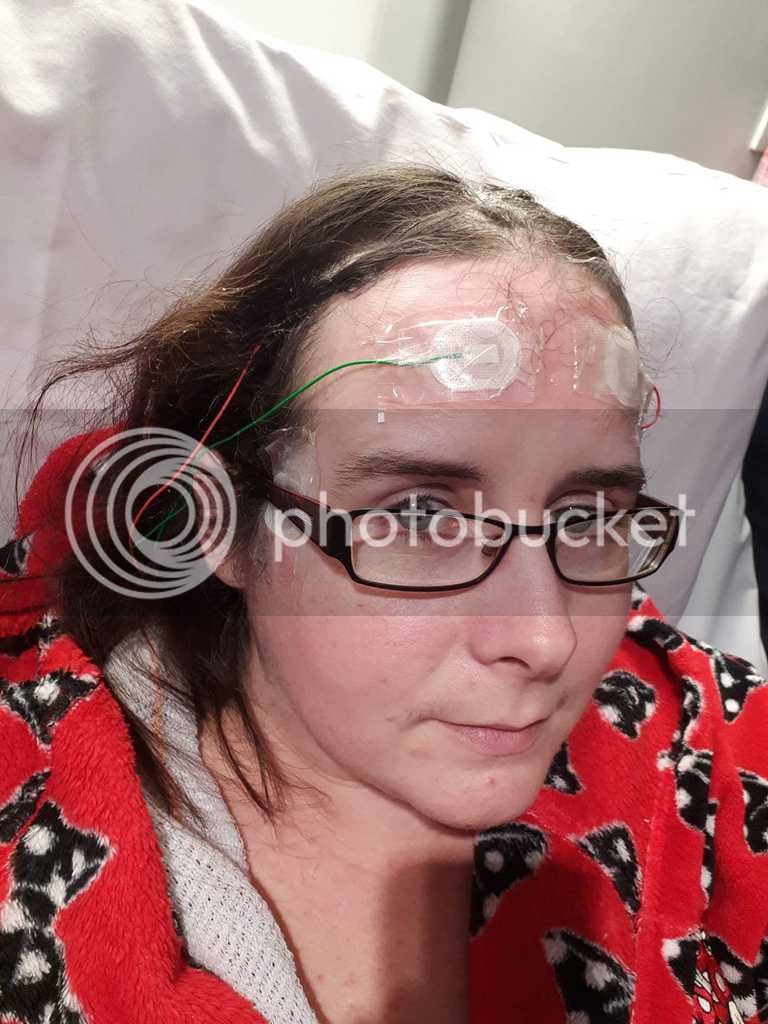 For now i'm being referred to a neuropsychologist again, they said they noticed that i didn't recognise or couldn't tell which nurse was which, or name any of them even after seeing the same people for days, or that i'd forgotten if i'd taken my medication.
Click to expand...

I'm not sure that's particularly diagnostic -- I don't know that I would remember the names of the nurses either. Hospitals are very disorienting, and it's tough to keep track of all the personnel, especially if you're sleep-deprived.

If they consider doing another EEG, maybe they have you go off the meds right away, since it can take a while for them to fully exit your system.

Thanks, i think i'm mostly just really tired at the moment, and feel really odd with having been off my meds for a few days. Waiting for my hair to dry after washing it twice and using half a bottle of conditioner (wouldn't want to risk blow drying it and cementing it!), still picking out chunks of glue. Then i think it's bed time, and man am i looking forward to my own bed!

Guess i'll have to wait a few months til i see the neurologist again and see if he saw anything while looking through the rest of the EEG and not just the bits that were indicated. Or maybe he'll only look at those instances, i don't know.

I think the real reason he's referring me to a neuropsychologist again is because he maybe thinks i'm having non-epileptic episodes as well as the epilepsy. He did say he's in no doubt that i do have epilepsy, but that there's maybe something else going on, or it's my attention span/concentration that's an issue also.
S

I know my neurologist has seen a lot of activity during regular EEGs that he has had done. I've usually had to skip 1 dose before them, or leave a minimum 12 hour gap.

Nakamova said:
I'm not sure that's particularly diagnostic -- I don't know that I would remember the names of the nurses either. Hospitals are very disorienting, and it's tough to keep track of all the personnel, especially if you're sleep-deprived.

If they consider doing another EEG, maybe they have you go off the meds right away, since it can take a while for them to fully exit your system.
Click to expand...

I agree with Nak about the thing with the nursing staff, who would remember that stuff :roflmao:.

Did they forget there were probably quite a few medical staff coming in & out to see you, not to mention you were sleep deprived & once they took you off meds you wouldve been getting withdrawl symptoms.

I never knew any of the nursing staff names whenever i went to hospital, after my surgery it took me 12 months to remember my treating neuros surname so I used to just call him Dr Patrick (which was his 1st name) :roflmao:. I got a new neuro in 2016 & I call him by his 1st name Saul, much easier then remembering his sirname.

Good luck with getting the glue out of your hair, it will take quite a few attempts & your head will probably be sore for a few days.
Enjoy that sleep back in your own bed

To be honest i think the meds have only just gone out of my system today, because i have such a headache! They only took me off the Keppra and clobazam, and kept me on briviact.

Guess i'll wait til next appointment and see what he says. Ahhhhh my lovely snug bed :hugs:

Have been at the neurology centre in liverpool again today, the neuro surprised me by saying he'd like me to do another 5-7 day VEEG, after i've had the testing done by the neuropsychologist. I didn't really know what to say so i said no for now, and we'd wait and see how it goes. He wants me to do one where i stop taking my meds before i go in, to give them time to get out of my system. Since i completely forgot about the neuropsych evaluation being tomorrow morning and i didn't arrange for transport to the hospital i've had to cancel it and hopefully will rearrange soon
N

That's sounds frustrating! Just when you get the last bit of glue out of your hair, they want you to get hooked up all over again...

Yeah, and my hair is mega long right now since i haven't been able to afford a haircut since last july lol. It's nearly down to my backside >.< I think by the time i rearrange with the neuropsych and get all that done, it'll be sometime near the end of next year if i do agree to another VEEG. I do want one because i want to know if certain things i've been experiencing are seizures, but then i don't want to have another week where my brain completely refuses to misbehave for once lol
S

I used to have long, extra-thick hair--until I was given Tegretol in 1987. I lost about 85% of it due to an allergic reaction then, and it never grew back in. Now, I'm taking Topiramate, & its causing me to lose the rest. The ponytail holders that I couldn't get around my hair twice I can now 6 or 7 times. The ones that I could not even fit all my hair into can be wrapped 3-4 times around what's left on my head.
N

Sabbo, I don't suppose you can switch to a different med? Studies show that after stopping it, the hair loss can be reversed. I started experiencing hair loss while on Zonegran, but when l switched to lamictal it came back. Sometime it takes 6 months, because of the way hair growth cycles.

Loopy, you could always ask a friend to trim your hair, just the ends. I'm like you, I put off cutting my hair as long as possible, and when I do get it cut I go to the cheap place ("Supercuts") which costs about $20.
S

Unfortunately, I've tried every AED out there for simple & complex partials. Depakote, which I was allergic to, directly lists hair loss as possible side effect in its papers. Even Topamax/ Topiramate says so, but you have to read deep into its papers. Keppra left me doubled over in stomach cramps.
I saw a dermatologist a long time ago--when Rogaine was still a prescription. The only suggestion he had was to prescribe it. I said "No thanks". Even though my parents were willing to pay for it simply because if I stopped using it, any hair that did come out would fall out. Also, it could actually cause more hair loss.
You must log in or register to reply here.
Share:
Facebook Twitter Reddit Pinterest Tumblr WhatsApp Email Link
Top